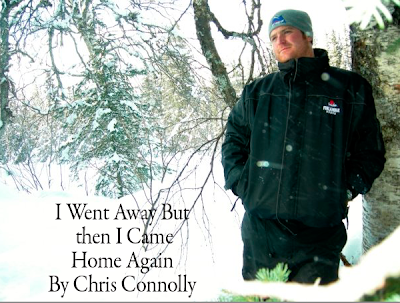 Hello readers. I have, as many of you will know, finished a first draft of my memoir "I Went Away But Then I Came Home Again." The book tells the tale of my leaving New York at the age of 22 and going to live in the small country of Latvia soon after the Soviet Union disbanded. The experience was, to put it mildly, exuberant. In Latvia I explored a newly liberated, but badly bruised culture, played enormous amounts of basketball, tutored prostitutes in English, had an ill-advised love affair with a student, MCd the Latvian Rock Against AIDS tour, got into fistfights with mobsters and survived some genuine, world-class poverty and starvation. If all that sounds a bit trying, I assure you it wasn't. The resiliency of youth allowed me to look on my experiences not as travails, but as adventures, and I have remained true to that outlook in recounting them.

Although I am currently shopping this book for publication, I also wrote it to be read. So if you're willing to put in the time to read my work, I'd be happy to send it to you. I am trusting that you will not take the manuscript, pretend that you are another native New Yorker named Chris Connolly who joined the Peace Corps and did all kinds of wacky things in the former Soviet Union, but that would be such a ballsy crime, I’d almost like to see it happen. I also hope that if you're acquainted with publishers/agents and other decision makers (and you like the book) you'll pass it along to them with a hearty recommendation.

So... if you wanna read it, I wanna send it your way. Just email me and put "I Went Away" in the subject line. No reasonable request will be refused.