Last graduate of ’45, becomes first of 2012
Dominick Famularo, who left BHS for WWII, receives diploma after 67 years
By Chris Connolly

Dominick Famularo, 85, as beloved a figure as you’ll find in Baldwin, finally received his high school diploma last week. It was bestowed at a special Board of Education meeting that also celebrated the service of retiring district personnel.

“School board members are not paid, but we are rewarded…,” began Trustee Robert “B.A.” Schoen, addressing a sizable crowd that included many members of Famularo’s family as well as a dozen representatives of the Baldwin Fire Department, with which Famularo has served for 62 years. “Tonight is one of those rewards. Tonight I have the privilege to represent the Board of Education and, by extension, the entire community, in correcting an oversight that is 67 years overdue.”

Schoen fought to control his emotions at times during his remarks, and it was clear that ensuring that Famularo received his diploma was one of the chief initiatives of his remaining weeks on the school board. (Schoen will be replaced next term by Trustee-elect Eric Harrison.) Schoen was, in fact, responsible for the movement to award Famularo a diploma — an action inspired by his receipt of an old BHS yearbook from a friend...

See the rest here.
Posted by Chris Connolly No comments: 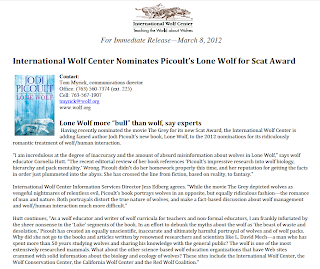 Worst PR campaign I have been pitched this young year: The International Wolf Center's SCAT Awards--which are sarcastically bestowed to battle "wolf misinformation in the media." This year's nominees were the movie "The Grey" for artificially enhancing wolves' viciousness, and the Jodi Picoult book "Lone Wolf," for "its ridiculously romantic treatment of wolf/human interaction." Good effort wolf.org, but there are better outlets for your energy. The wolves don't care how they play in the media. The wolves are ok.
Posted by Chris Connolly No comments: