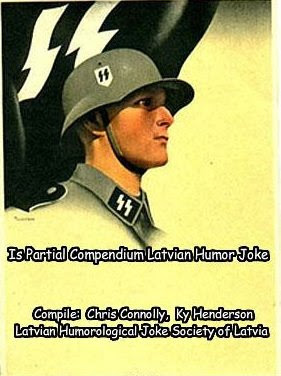 (To read the definitive history of these jokes: Click here. If you don't care, read on!)

Joke:
Three men are in ship. One Latvian, one Russian, one Lithuanian. Lithuanian take out one bottle wodka. Russian kill Lithuanian, then drink wodka. Then Latvian wait until Russian drink self to sleep, then kill. Is end.

Joke:
Latvian: Is so cold.
All: How cold is?
Latvian: Very. Also dark.

Joke:
A fishmonger says to a bootblack, "Are there any more potato left?" Bootblack says, "Yes, one. But it has gone bad." The fishmonger says, "I am very hungry. I have not eaten for three days. I shall eat it, even if it makes me very ill." And bootblack says, "I did not speak truth. In reality, there is no food left. You shall go hungry yet another day, my friend."

Joke:
Man is hungry. He steal bread to feed family. Get home, find all family have sent Siberia! “More bread for me,” man think. But bread have worm.

Joke:
Janis: I hope my son does not die during night.
Guntis: What is "hope"?
Janis: Yes. I know what you say.
Guntis: No. I am serious. What is hope?
Janis: In truth, I do not know.

Joke:
Questioning: Why did chicken cross road?
Answering: I have not seen chicken since I was very young, on my parents' farm. This is before the Cossacks slaughtered them. I can still hear screams of sister as soldiers rape her. But back to question, where did you see chicken? I am very, very hungry.

Joke:
Man car break down near house of farmer. Take shelter in barn. Find farmer daughter in barn. Oh! Hot stuff! But TOO LATE! Is already rape by soldier.

Joke:
Latvian walk into bar with poodle under one arm and salami under other. Eat salami first.

Joke:
How many Latvian is take screw in light bulb?
Only one. Obtain light bulb is hard part. You have potato?

Joke:
How is get one-arm Latvian out of tree?
Is no one-arm Latvian! Why you silly? All go Center for Great Peaceful Physical Reassignment. You no ask.

Joke:
Why six is afraid seven? Because seven have many friend politburo.

Joke:
Latvian walk into bar with pig on shoulder. Bartender say, “That look delicious!” But pig say, “No. Is Latvian. Taste is similar to dog.”

Joke:
Latvian walk into bar with mule. Bartender say, “Why so long face?” Latvian say, “I was thinking of my daughter. She has been lie with soldier for potato feed baby. “

Joke:
Is dead dog in road. Is dead Latvian in road. What difference?
Dog have fur keep warm. Also, freedom. And dog try eat poop for pleasure not just survive. So many thing!

Joke:
Three Latvian are brag about sons. “My son is soldier. He have rape as many women as want,” say first Latvian. “Zo?” second say, “My son is farmer. He have all potato he want!” Third Latvian wait long time, then say, “My son is die at birth. For him, struggle is over.” “Wow! You are win us,” say others. But all are feel sad.

Joke:
Boy: But mother, I no are like grandma.
Mother: Eat anyway. Is no potato.

Joke:
Latvian walk into bar and say, “I have not eaten for many days. One full beer will be too much for me. How much just maybe one shot beer?” Bartender say, “This is can do for you. Is two centimes.” Latvian say, “Oh. I was hoping it would be less. I do not have that much.”

Joke:
Is Latvian couple have been marry 60 years! But for long times, is no making sex. For 60th wedding anniversary, wife is buy for husband hooker for the have sex! Hooker is arrive at door one fine day and is say to husband, “Hello! I here give you super sex!” Man is say, “Oh! I will have the soup.” Then hooker is say, “What? You have soup? Why you no told this?”

Joke:
What are one potato say other potato?
Premise ridiculous. Who have two potato?

Joke:
How many Latvian is take screw in light bulb?
25. One screw in, 24 ride bicycle generator for 1-hour shift. But time probably better spend search food.

Joke:
Latvian is capture by cannibals. Cannibals say, “We are kill you and eat you and use skin for canoe. But you may choose means of your death.” Latvian say, “Okay! You are give me fork, please!” But oops! Is forgot how use!

If you are have own sample Latvia Humor Joke, please is send curator Chris Connolly at chrisconnollyonline@yahoo.com. You are thank.
Posted by Chris Connolly

In Latvia every website have black background.
Also font is black.
Actually, just screen, no electricity.

Much anger and malnourish from no potato.

Joke lose premise. No one laugh.

Is sad, but such is life.

Did forget mention is also cold?

I dig how everyone upset by jokes about Latvia being used as the principle example of backward eastern European stereotypes gets angry specifically at America. Almost like it's not the first time those angry tears have been shed and thank you for being a meta secondary joke for the page to enjoy.

Lmao at the "how would you like it if we joked about 9/11!?" post. How upset you are at these jokes is about as sad as the people who would actually care about a 9/11 joke if you even had a good one (you don't).
Never seen a good 9/11 joke. Seen tons of funny 9/11 Photoshops, though.

I am American and I know where is Latvia. My daughter is go there and am rape by soldier. Now when i look at potato I am sad, you are win us.

these jokes are funny, and it interesting to read humor from fictional countries.

I wonder what kind of humor they have on Kashyyk, canonical home planet of the Wookies from Star Wars, or Westeros from Game of Thrones

*I'm Latvian you fuckstick and let me tell you something!!! You know why Americans are so stupid ?Because when man and a woman was making a baby - woman did not want to,man didnt try to-the leftover is what we now call Americans. By the way your grammar sucks as shit. So maybe go to colledge or something retard

Same could be said to you Haha! Have a nice day from The United States Of America

Actually I could point straight o Latvia on a map and find your history very interesting! So Do you know how many jokes there are about the US? Do we explode over it? No. It's all in good fun so cheer up!. We aren't the kings of the world lol

Now that America is facing food shortages and breadlines due to coronavirus, some of these jokes can be reworked....