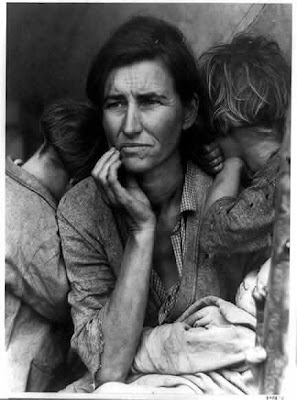 Can I just say how sick I am of the economic meltdown? Jesus! Enough already. It’s getting wearisome. Can everyone just stop melting down already? Grow a pair, people!

First of all, consumers, investors: This isn’t a depression. I know. I studied the depression in school. Depressions are WAY more dusty than this. Also, look out your window. Do you see a giant, backfiring black car with everything a family owns crammed inside and grandmaw strapped into her rocking chair on the roof? No. Do you see anyone selling apples or pencils? No. Do you see anyone in a stovepipe hat with the lid hanging off at a comic angle? No. Is there a lactating mother breastfeeding a malnourished granpappy in your barn? No. 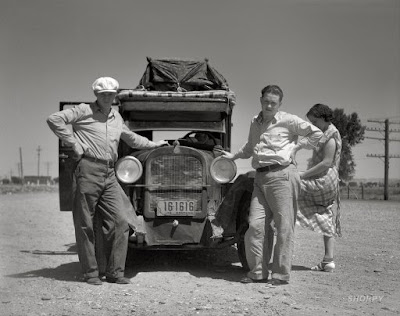 I personally believe the whole depression thing was just a lot of hype and panic anyway. Sort of like the holocaust. I mean, if all those so-called “poor people” were really so poor, how come they could all afford those half-finger gloves, huh?

No. What we have here is a non-crisis crisis cooked up by the liberal media. We’re in good hands. George W. Bush is steering this ship. Mission accomplished. Don’t you see? He’s giving all of our money to the wealthiest people of all time. And that’s good for the little people. He said so. And so did a lot of the other people who are going to get the money.

Look, I’m no economist. In fact, like many average Americans, I can barely pay my mortgage anymore, but according to what I saw on The Daily Show, they’re taking no chances with this money. This money’s not even going to the VP-level Incredibly Rich White Guys. This is only going to the very tippy top, cream of the crop Incredibly Rich White Guys. Edward Jones doesn’t get any of this money. He’s too far down the ladder. Price and Waterhouse get some, but Coopers is on his own. I think JP Morgan’s cryogenically frozen head in a jar gets about a third of the pile, and Wells and Fargo will also be taken care of. 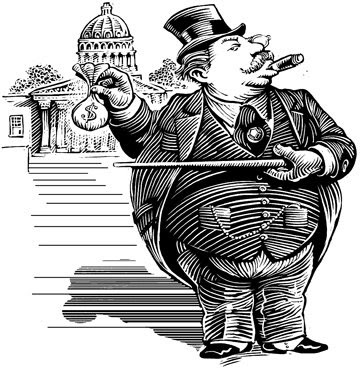 To eliminate any chance of this money ending up in the wrong hands, this cash is only going to guys who have Scrooge McDuck-style gold coin swimming pool rooms in which to store it. In order to get a chunk of this money your mansion’s real estate listing should read: 48 BR, 35 BTH, helipad, close to shopping, GCSPR.

I find all of this very comforting. I like to know that my money, and your money, is going to guys who are already really experienced at having a lot of money. And I feel even more blessed knowing that the guys channeling my money into the swelled coffers of America’s elite have a solid seven and a half years experience guiding my money into those same swelled coffers. When I give a cash gift that I can’t afford to a guy with more money than Germany, I like to know it’s going to be airlifted into his hollowed out volcano intact and with the greatest possible haste.

And thank you Lord Jesus Christ for personally appointing George W. Bush to guide us through this non-crisis. Why, without his leadership (through You of course) I might be puzzled by the fact that the largest charitable contribution in the history of the world is going to richest people in the history of the world. But through GWB’s wisdom (always with a tip of the cap to You) I can now see that, after having spent the last seven years building up the largest divide in wealth since the King John/Sheriff of Nottingham administration, GWB now realizes all it will require is just one more massive faceraping of the American people to start that perennially-promised trickling down of wealth.

Look, we’re on the brink of success, not catastrophe, you coupon-clipping cowards! We’ve managed to ensure that the fewest number of people ever have the greatest percentage of wealth ever and if we can just tighten our belts and give them a wee $700,000,000,000 more of our dollars, it’s definitely going to start trickling down. Definitely! I mean, once you’ve built a personal space station and a deep-sea lair and have a safe made of solid diamond and a live-in mad scientist/inventor, you obviously start buying Ford Tauruses and eating at Panda Palace, right? Jeez.

I know it’s tempting to view this as Bush and his henchmen giving one last ditch handout to their Robber Barron friends before becoming Robber Barrons themselves, but if you look at the facts it’s merely the last step in a well-executed plan. Stay the course, America. It’s just one more massive faceraping of the American people. One more little faceraping! Chill the fuck out.
Posted by Chris Connolly

Hey all you anonymous'es, quit it. I'm the original anonymous and if you guys start using my to-lazy-to-figure-out-how-to-comment-without-the-anonymous-button-button how will Chris know it's me? Sorry I got a little distracted by that. My real comment is: Hahahahaha(laughing)Buhuhuhu(crying), I forwarded this one to most of my family