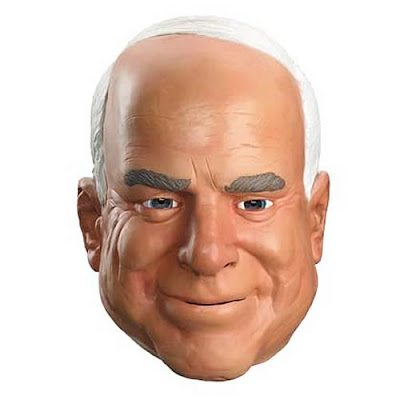 When this presidential race began, I actually liked John McCain. Now, I’m no undecided voter. I liked Barack more than McCain from the beginning—along with Hillary Clinton and John Edwards—but it seemed to me that McCain’s heart was in the right place. That back in ought five, when he entered politics, he might just have been doing it for the right reasons.

As the campaign progressed my opinion of McCain began to dim. But I chalked up the increasing distaste with which I would watch him to the ravages of a tough race and the strategies of the famously cynical and conniving GOP. I almost began to think of McCain like Darth Vadar—a being of essential good who’d been poisoned and corrupted by powerful evil forces—and I even maintained a vague hope that, if he got himself elected, McCain might tap into that tiny bit of good left inside him and throw the emperor into a giant void. (And by the way, what Evil Empire architect decided the Death Star should be about 90% gaping, bottomless chasms?)

Watching the debate last night however, I realized for the first time that McCain never did get into politics for the right reasons. There is no underlying good in him. He’s just another power hungry asshole who puts himself first and will pretend to believe anything he thinks will get him elected. (My brother sent me this Rolling Stone piece which gets deep into this subject.)

The transition of my opinion of McCain from respect to loathing really began when he chose Sarah Palin as his running mate. This decision was so cynical and so poorly thought out that it’s now basically a joke. Intelligent republicans everywhere are embarrassed by the choice and watching their shit-eating grins as they discuss her candidacy reminds me of nothing more than the way I’ve felt the last 10 years telling people I am a Knick fan. (Yes, I still root for the team, but only in private and I prefer not to discuss it too much.)

But even given all of that I was able to forgive the Palin selection on the grounds that VP choices do not matter very much. I was riding my bike one day and I tried to think of the very last person Obama could have nominated as VP without losing my vote. Brad Pitt? I’d still vote for him. Brad seems to believe in the right things. Lance Armstrong? Hell yeah! I’d totally vote Obama/Armstrong.

In the end, I decided that the very last person in the world Obama could have appointed his running mate without causing me to switch sides is Mike Tyson. VPs matter so little in the grand scheme of things that I would literally walk into a poll and pull the lever for Obama/Tyson. On the other side of this divide is O.J. Simpson. I would not vote Obama/Simpson. I call this the Tyson/Simpson line.

Yet even while giving the VP nod to Palin was pretty gross, I didn’t write McCain off as a genetic-level asshole directly thereafter. The next stop on the train to loathing was his constant strategy changes. This was when I first began to realize that McCain will say absolutely anything he thinks will win the day. How many McCains have we already seen in this election? Remember the one who claimed Obama was a Paris Hilton-like celebrity? When was the last time we heard from that guy? What about the National Defender who worried Obama was a Muslim terrorist? Is that guy still in there somewhere? Surely you recall the John McCain of four days ago who had such a deep and abiding respect for Obama? Is that dude still around? Or has he been completely consumed by the wounded patriot--cut to the quick by comparisons to segregationists—that we saw last night? Which John is John?

The truth, a truth I finally realized last night watching McCain wince, grimace and lie in what was nonetheless probably his best performance, is that at a base level, the real John McCain is driven solely by the desire to get elected. The Rolling Stone story I link to above suggests that his passion for power was ignited by a desire to out-achieve his father and grandfather. But whatever his motivations might be, I have finally realized that a desire for power is the only thing that drives him.

John McCain’s health care plan, which he pitches so fervently to Joe The Plumber, is actually a near-naked handout to big business. He proposes a $2,500 tax credit to individuals and $5,000 for families so that they can sort out their own healthcare. What? That doesn’t even look good on paper!

My stepmother has recently been battling some health problems and she and my father have been spending countless hours on the phone with insurance companies. She actually said to me the other night that dealing with the insurance companies is causing her more anguish than the life-threatening illness she’s trying to beat! Oh, and one more thing, both my father and my stepmother ARE INSURANCE LAWYERS!

My father was a managing director at the world’s leading risk specialist company, has lectured on insurance issues and tort reform at Harvard and Oxford and appears as an expert witness in trials all over the planet. My stepmother is lawyer and top executive at one of the world’s biggest re-insurance companies. Together, they probably have about 80 years of experience at the highest levels of the insurance industry and THEY CAN’T FIGURE OUT THEIR INSURANCE!

You think Joe the Plumber’s going to spend his $2,500 wisely? How about his laborer Jose? You think Jose’s going to get the most from his allotment?

The fact is, while McCain claims he trying to aid small businesses, he’s really absolving big businesses of their obligation to provide health care for their workers. You think it takes a long time to get Group Health Cooperative on the phone now? Picture the wait times when all the little people start trying to iron out their individual care plans. And which businesses will be saving the most money when they no longer have to take care of their workers? That’s right, big ones. The Big Ones with the most employees.

Watching McCain spout these lies last night as he flailingly attempted to drag the discourse down into the muck was like watching the death throes of a shapeshifter. Eventually though, his bullshit finally reached critical mass—it seemed like he donned and discarded so many disguises that he couldn’t remember who he was supposed to be anymore and Obama—faced with the much simpler task of only saying things he actually thinks—laid him out.

A few months ago, I was really excited to have an election between two men I considered to be “in it for the right reasons,” but as McCain has consistently and irreversibly lost ground in the last few weeks he’s started flopping around like a fish in the bottom of a boat. Last night, he switched masks so many times I ended up staring right into his real face.
Posted by Chris Connolly

Damn, guy. You nailed that on the head, and then some.
Rock on.