#60 - A Word of Caution Regarding Alien Shapeshifters 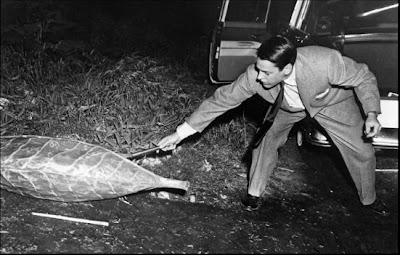 I believe there exist certain contingencies for which a man needs to be prepared. By this I do not refer to pragmatic things like changing a tire or hooking up a DVD player—although those skills are handy—but rather to certain, more austere potentialities. A man should, for example, know in advance what three things he will wish for should he ever find a lamp with a genii in it, because making that kind of high-pressure call on the spot can be kind of tricky. He should likewise pre-decide whether he would kill Hitler if teleported back to 1920’s Austria in spite of the fact that changing world history might jeopardize his chances of being born; and he should also spend some time deciding whether or not he would eat human flesh to stay alive after a plane crash. (I would. In fact, I might eat human flesh just to see what it tastes like.)

For the most part, while I personally prefer to make these kinds of decisions ahead of time, I don’t worry too much about people who leave them for later. It’s sort of like how I prefer to depart quite early for the airport. Do I think that’s the best way to do it? Yes. But is it any concern of mine if someone else wants to go rushing around like a chicken with its head cut off? Not so much.

There is, however, a looming crisis threatening mankind about which I can no longer keep silent. I speak, of course, of alien shapeshifters with the ability to assume the identities of our loved ones. I believe far too many people are simply whistling past the graveyard, so to speak, when it comes to these malevolent mimics from outer space, and I can no longer stand idly by when a few almost tragically simple precautions could render the alien shapeshifters virtually powerless.

And so it is that I call on each of my readers to sit down and think up a few Alien Impersonator Security Questions with which these evil doppelgangers can be identified and weeded out. These questions should be highly personal in nature—kind of like the “secret word” you might teach your child if you were sending someone he’d never met to pick him up from school. Also, you should not share your Alien Impersonator Security Questions with the people for whom they are devised. A proper AISQ should be something the interrogatee (the real one that is) will answer without hesitation, but which the alien could not possibly know.

As is well known, any shapeshifting alien worth his salt will do some pretty in depth research into someone he intends to kill and replace. They’ll know your birthday, your favorite animal and your sports allegiances. They will even, by donning you as what they callously refer to as a “meat mask,” absorb some of your major memories: first kisses, childbirths, best summers ever!, things like that. But even the highly-advanced alien version of wikipedia doesn’t contain every fact, every nuance, of a human life. No indeed. In fact, every life contains private moments and memories that are only known to those who directly experienced them. I will now, at great risk to myself and my familiars, divulge a few examples of the AISQs I have devised for people close to me.

Obviously, by doing this, I will have to go back and plan out new questions for these folks, but this is a small service I will gladly perform for the benefit of the human race. Also, please note that the optimal way to use these questions is before your friend or family member has been killed and sealed into a gauzy cocoon of alien saliva in your basement or broom closet. Hopefully, when you deploy these AISQs, you will be standing in a room with, say, both your brother and his alien replica and you’ll be trying to sort out which is which. However, even if your loved one is already dead, you can still use these questions to oust the alien and kill him. 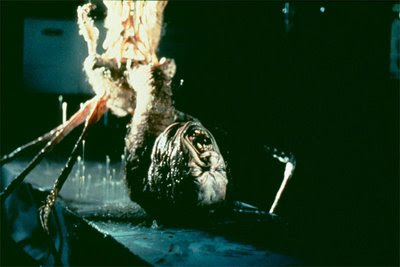 *Bonus Alien Shapeshifter Safety Tip!
If you manage to dispatch your alien via decapitation, good on you! But please remember to burn or lock up the head! If you don’t, it will sprout legs and scurry away and become even more of a nuisance than the alpha alien that begot it.

Subject: Josh
Relationship: BFF!
Question: Please define the term “turbulent wind.”
Answer: “’Turbulent wind!’ Or, more precisely, ‘Whoa! Turbulent wind!’ is what you shout when a preppy girl at a private school party in Brooklyn suddenly bolts from the dance floor and almost knocks you over. It’s an extremely goofy thing to say, but if you manage to pull off an underage bodega beer purchase and you utter the phrase about 4,000 times it will give you the uncontrollable giggles.”

Subject: Ky
Relationship: BFF!
Question: In the Maxim Magazine casting of Star Wars, what character am I and what character are you?
Answer: “You are the poor droid in Jabba’s Palace that’s having his feet burned when C3PO wanders into the droid torture room and I am the orc-like creature who accidentally falls into the Rancor pit when they push Luke Sywalker in there.”
How I Came Up With This: During the heady days when I worked at Maxim Magazine with Ky, we came up with an extensive equivalency casting of Star Wars based on the magazine staff. Our roles were chosen to underscore our low standing on the Maxim totem pole. Incidentally, the orc who falls into the pit is named Jubnuk and he’s one of Jabba Desilijic Tiure’s nine Gamorrean guards, and the foot torture droid is a 12 Series Traffic Control Droid from Cloud City.

Subject: Joy
Relationship: Loving Wife
A Note on AISQs for Spouses: As you probably know, when an alien shapeshifter is targeting a human, the bug will generally spend the bulk of his research time investigating those nearest and dearest to his prey. For this reason I recommend scripting a series of questions through which you can ascertain whether or not your wife is actually your wife. To this end I have drilled into Joy a sequence of what I will call “Sports Call and Responses.” These are words or phrases which, when uttered by one sports fan, will automatically illicit a specific response from a second sports fan. Obviously, most alien shapeshifters will have been furnished the counterparts to each of these phrases as part of their Rudimentary Humanoid Sports Information Data Pack, so when I’m testing Joy I will require the following dialog to be completed exactly and without variance.
Sports Call and Response AISQ Dialog:
Me: Brett Farve.
Joy: Gunslinger mentality. Loves to play the game.
Me: Dirk Nowitski.
Joy: Seven-footer. Shoots like a guard.
Me: Duke, Carolina. Giants, Cowboys.
Joy: Throw out the records when these two get together.
Me: Joy in Madison, you’re on the air.
Joy: Thanks Chris. First time, long time. I have a few quick points then I’ll hang up and listen to what you have to say. 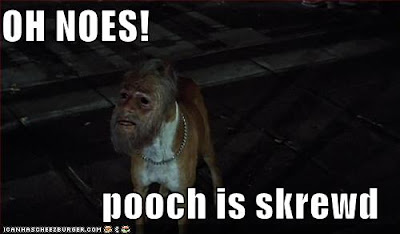 FYI, my Star Wars equivalent is Llando Calrissian. You fucking know it is.

Interesting. Okay, first of all, let me mention right now, as I always do when the subject of Billy D. Williams comes up, that he was our graduation speaker at Fiorello H. LaGuardia High School of the Performing Arts.

And secondly, let me state, before a flood of ex and current Maximites start logging on hoping to find out who they were in Maxim Star Wars, that Ky and I were mostly floating suggestions back and forth regarding who we were, not who other people were. But having said that, if you think you were Lando, you're dreaming. At best, you were the little Wall-E looking droid that encounters Chewbacca in the hallways of the Cloud City and runs away. Biotch!

And in case you were wondering, my security question for you was: When you and I wanted to e-chat in a private manner, what hallowed 80s actor's official website chatroom did we use?

Stay tuned folks. Let's see if John is really John. Although, now that I think about it, it's really quite easy to conceive that John's been an alien all along... so what are we really testing here?

You are and will always be the turbulent wind beneath my wings.

Dude, you are SO not Grand Moff Tarkin. You might, at best, be Figrin D'an, manager and kloo horn player from Figrin D'an and the Modal Nodes who gig at the Mos Eisley Cantina.

I actually don't know the answer to that question. Although, it is worth noting that I have evolved - physically, spiritually, sartorially - since our Maxim days. So maybe "John" isn't "John."

That's right. Just relax and let that blow your mind.

Also, I am not that little Cloud City droid. I'm a sexy robot with a huge cock.

1. Those droids, proportionally, do quite well for themselves.

Sixty words of the caution have been spoken and idealized for the happiness of the individuals. The entire stories ache been shaped and turned for the full use of the emotional stability of the things for the humans.