We are very lucky around here to have an awesome roster of neighbors. I'm pretty much surrounded on all sides by people I have a genuine affection for. Just yesterday, I was hanging out on the floor with Max, when I looked out the window and found Danielle, my right-side neighbor, mowing my lawn for me! It was great.

Now, lest you think she was mowing my lawn because it was becoming an eyesore, I will explain the history behind this. First of all: our lawns adjoin. They're a consecutive patch of grass undivided by anything other than different choices in fertilizer. Secondly, when we first moved in here, it took me about a year to buy my own lawnmower since we were so damn poor. Because of this, I used to borrow their lawnmower, and whenever I did, I'd give them a little touch up out front to say thanks.

Nowadays, I not only have a lawnmower, but I have an awesome electric lawnmower which is very quiet and works like a dream. Not infrequently, when I get deeply involved in my mowing, I will feel a little silly turning around in the middle of this undivided patch of grass for no obvious reason, so I'll just mow both lawns. When Danielle mowed my lawn, she was paying me back for this.

But as much as I love Danielle and her husband George and the lesbian cop/hairdresser duo across the street, this post is about my newlywed neighbors on the left: Aaron and Ericka (and sister Missy.) I freakin' LOVE those guys.

I think because I've had bad neighbors in the past, my love for my current crop is especially intense. In San Diego, we lived next to a couple of yuppy dicks who did NOTHING to stop their shitty little yappy dogs from barking at anything on the street. If a leaf fell off a tree, they'd come out and bark at it. When the mailman did his rounds, they'd rush out into the yard and bark the entire time he was visible to them. It was so bad, the cool couple across the street used to stand in their yard yelling "Bark, bark, bark, bark!" into a megaphone until the yuppies would finally corral the dogs and bring them inside.

I also had some prime neighbors when I lived in Bed Stuy. At the time, I was working 400 hours a week at Maxim Magazine and rode my bike from Brooklyn to midtown every day. I basically never got home before 11:00 pm, and yet, no matter what time I finally got home, my neighbors--and their many, many infant children--were always out on the stoop drinking Mountain Dew, screaming and playing in the garbage.

I will say, when Aaron and Ericka (and sister Missy) moved in, I experienced a little trepidation. This was because the first thing Ericka did was unload about 500 scrap metal sculptures and strew them about the front yard. (See the back yard below.) Then, when all that stuff was unloaded, she started hauling in a couple dozen truckloads of unsculpted scrap: chunks of fence, castoff farm machinery, gates, wire crates, basically, anything that was made of metal. 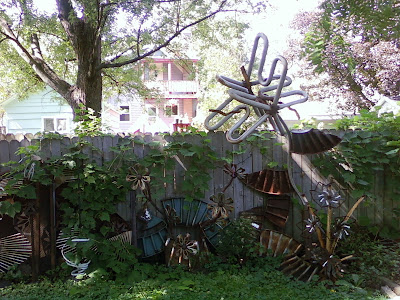 Was I 100% excited to have a whole garden of rusty, sharp, two-year-old-eye-level poky things spring up next door overnight? No. But I've not only gotten used to it, I've grown to love it.

Aaron and Ericka (and sister Missy) are contributors. Aaron is a blacksmith. (Yes. The kind with enormous forearms and fireproof hands.) Sister Missy is a jewelery maker. And Ericka is a scrap metal sculptor. And while you might look twice at the stack of abandoned bicycles and half-bicycles piled up along the side of the garage, I find having neighbors who do things and create things and think things infinitely preferable to people who are boring.

On Saturday, Ericka and Aaron got married. And I think their wedding preparations say a lot about why I like them so much.

Remember the preparations for your wedding? Remember what you brought to the ceremony? Flowers. Maybe a cake? Monogrammed flasks for your groomsmen?

Check out what Aaron and Ericka had: 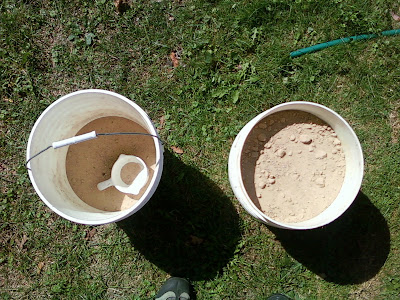 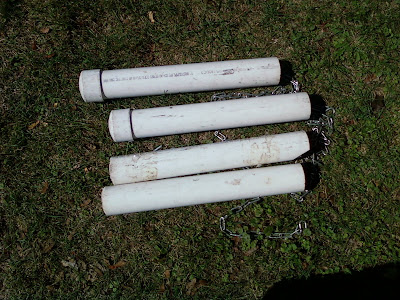 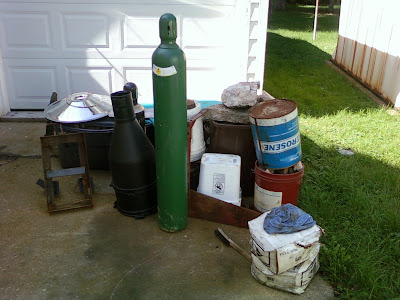 
Does it take some getting used to living next a constantly-evolving monument to art and the reuse of found materials? Of course. Does their dog occasionally try to eat my dog? Yes. Is it weird to see sparks shooting out of their garage because Ericka's welding in there? I suppose so. But it's never boring and their wedding was awesome and I'm glad they're my neighbors.

PS: In these trying economic times, it may behoove you to reread an older post. 21 Ways To Thrive In A Recessed Economy.
Posted by Chris Connolly

Motherfucker. You failed to mention the coolest neighbor of all...

I guess I have to start welding shit and throw some of my junk on the lawn before I get Chris Connolly's approval.

Bitch, I believe you got your due.

Hey Chris-
This is Erika's pal Cathy who brought the flaming eyeball cufflinks to the weddng. I just wanted to tell you how happy I was to see my cement filled pvc tubes finally get the recognition they so richly deserve. I, too, blog frequently about Erika.(http://aardvarkartglass.wordpress.com/) That girl is always doing something strange.
See ya at the next shindig,
Cathy