A friend of mine, Rachel, is the producer for a high-profile cable news show, and she sent me the following photo this morning. Apparently, the manufacturer of these super-multi-headed presidential candidate flip flops thought the show might help out with some buzz. 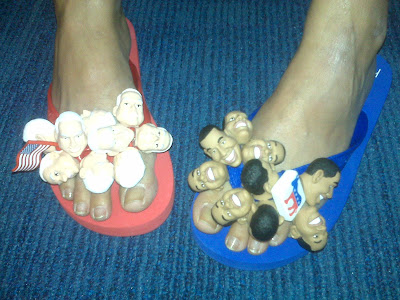 Um, yeah, they might have, except that super-multi-headed presidential candidate flip flops are a totally stupid idea. My first question, looking at these was, "Why so many heads?" I mean, if you're a real political junkie I guess I could see thinking flip flops that have a picture of Obama or JM, or even a single candidate head, might be cool as part of an outlandish convention outfit, but then the maker of the SMHPCFFs went ahead and put about 40 heads on there. Why? How does this happen? How do so many bad ideas get all the way to realization?

We all have wacky ideas. (I've long wanted to market a line of 41-ounce beers. Who would buy a 40 when you could have a 41? You can pour some out for your homies and still enjoy a full, refreshing 40 ounces!) But somewhere along the line most of us abandon them.

I think the people who take these things all the way to market probably don't have a lot of friends. Or they have the wrong kind of friends. Everyone needs to have access to at least a few friends who will mock you mercilessly when you're getting ready to do something stupid. Having a couple really vicious, witty, sarcastic friends who don't give a shit about you is really important if you want to avoid putting out a line of flip flops with way too many presidential candidate heads on them.

I remember when my Peace Corps group first arrived in Latvia there was this kid who wore gloves all the time. It was July and this dude was sitting there at lunch eating with a big ol' pair of gloves on. Obviously, it didn't take long before someone asked him about the gloves and he returned that he was a pianist and he needed to protect his hands.

Oh really? You're in the Peace Corps getting ready to go live for two years in some crappy town where you'll have to herd sheep and shit on a wooden toilet and you're planning to wear gloves for the entire time?

I remember thinking that "Gloves" must have been from the Dakotas or Alaska or someplace where residents don't benefit from a lot of human contact. Because if the guy had workshopped the gloves affectation to even one person, he would have received the smackdown he needed to avoid that mistake.

Imagine if someone you knew came up to you and said, "Hey, when I meet the 70 or so new people with whom I will be working closely for the next two years I'm thinking about impressing them by wearing gloves and telling them it's because I'm a pianist."

Wold you even have to utter a word? Wouldn't your face say it all?

PS: I was just having a little think about these and I believe the point here might be to wear the sandals depicting the candidate you do not support--the implication being that he is a "flip flopper." But does that make these less stupid or more stupid? I can't really say. I think if you're standing at the Democratic convention wearing an Obama shirt and pin and an American flag tophat and waving an Obama banner it would require a great cognitive leap for me to recognize the implied wordplay in your insane footwear.
Posted by Chris Connolly

If they were kidd gloves, you could call him "The Kidd". I think that would make it worth it. Don't you? I mean, who does'nt want to be referred to as "The Kidd" Chris?