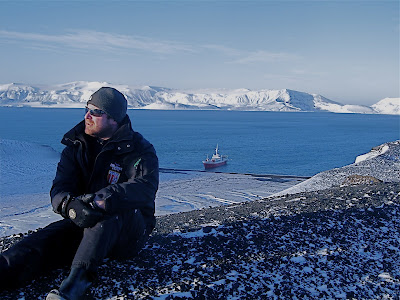 1. Crossing the Drake Passage to Antarctica

Fittingly, the most preposterous puking in which I have ever engaged took place in the most preposterous place I’ve ever been: Antarctica. Or, to be more specific, in the notorious Drake Passage, which separates the tip of Argentina from Antarctica. The waters of the Drake Passage are said to be the roughest in the world, and as we set sail through them our expedition leader warned everyone on board to take seasickness medicine as soon as possible.

“Don’t try to be a tough guy and see how long you can last,” he warned us. “If you do that, you’ll never be able to keep the medicine down long enough for it to take effect.” As he said this, he held aloft a corked jar filled with seasickness pills attached to which was a sign reading Take One.

Those of you who know me personally know that I generally consider myself exempt from these types of warnings, but when it comes to my stomach and its perpetual eagerness to start voiding, I know my limitations. So I took the man at his word and swallowed a pill the moment I got back to my cabin.

Unfortunately, prior to my trip, I’d gone to the travel doctor at my clinic here in Madison and asked him for some motion sickness medicine. Although I told him what the plan was, I don’t think he grasped the seriousness of the adventure I was embarking on because he gave me something intended to keep a child from getting sick in a car.

When I took the pill and went to sleep, we were still in calm waters. The troubles didn’t start until a few hours later when I was suddenly awakened by the sound of all the drawers in my wardrobe simultaneously sliding out of their housings and smashing against the opposite wall. Bracing against the force of the ship’s list, I flicked on the light beside my bed and found myself in a shifting environment of sliding furniture and slamming doors. The drawers in all the room’s tables were opening and closing as the Antarctic Dream—a retired Chilean naval vessel—pitched and rose in the stormy seas.

Smartly, before dealing with the flying furniture, I took another of the pills my well-meaning, but under informed doctor had prescribed me, and then set about the arduous and disorienting task of, I suppose I can actually say, battening down the hatches. 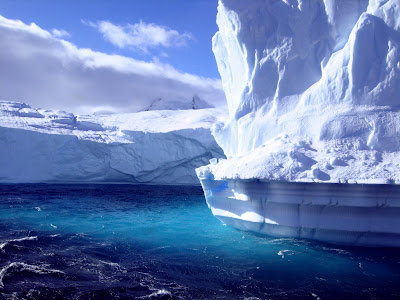 There were toggles screwed to most of the drawers, so I closed those. I picked up the phone (and why was there a phone anyway?) from where it had careened under the writing desk and shut it up in one of the drawers. I took the curtain ties off the window and used them to tie the wardrobe doors together. I also fastened the desk chair to the desk which someone had wisely bolted down. I then went into the bathroom and occupied myself trying to chase down and capture the contents of the medicine cabinet which were rolling all over the place.

All of this took a lot longer than you’d think, because to reach anything or get anywhere in the room I had to wait until the ship flung me in that direction. But throughout all of this I never felt sick.

Once I’d secured the environment as best I could, I lay on my stomach, wedged my feet into the space between the footboard and the mattress, established a death grip on the corners of the bed and—don’t ask me how—fell asleep!

My bed was laying port to starboard, which meant I was able to sleep pretty well until the ship would take a roll from bow to stern at which point I’d be cast onto the floor and wake up. Luckily, one of the times this happened, I realized I’d ended up nicely wedged between the bed and wall so I just said fuck it and slept there.

When I popped a pill and showed up at breakfast the next day I was actually in much better shape than most of my shipmates. The few passengers who’d braved the journey to the dining room were looking pretty green, and even the staff was clearly feeling the strain as they lumbered around the room trying to balance cups of tea and coffee.

Obeying the rule of “one hand for you, one hand for the ship,” I managed to shuttle a plate of fruit and a cup of coffee back to a table and was about to start eating when I made the mistake of looking out the window. Shut up in my dark room, I hadn’t quite realized the extreme parabola of the rolls the ship was taking, but in the dining room, ringed by large, clear windows, I instantly got an acute sense of the situation. I was looking out a window across the room to my right when suddenly the horizon swept up out of view and appeared again on my left. This sudden and total reversal of orientation sparked a tidal wave of nausea that surged through me in a matter of seconds. I instantly went from Chipper Chris On An Adventure to Survival Mode Chris Who Thinks Things Might Never Be Okay Again.

“I think I might be getting seasick,” I announced to my tablemates.

“Okay. So what are you still doing here?” Said Karla, a young Australian woman across from me.

“That’s a good point,” I conceded.

“Yes. The time to go is before you get sick.”

So I got up, waited for the ship to rock the right way, and headed to my cabin. I immediately gobbled down another tablet and lay in the middle of the bed trying to regain my senses. I lay there for about 15 minutes battling the nausea and cheering for my digestive system to work its magic before seasickness took hold. Of course, the pill I’d taken was woefully overmatched by the seas I was in, so I never stood much of a chance.

Still pretending I might not throw up, I allowed myself to go into the bathroom under the pretense that “it was cooler in there.” But about two seconds after I got within puking distance of the bowl, I knew it was coming.

“This is happening,” I thought. And then I threw up for eleven minutes.

Throwing up is often a kind of fits and starts process. You throw up for a while, then you stop, you breathe, you do a little internal inventory, sometimes you throw up again, sometimes you don’t. It goes something like this:

You get the idea.

The reason I know this lasted for eleven minutes was that I timed it on my watch. One really bizarre thing about my bout with seasickness was how sentient I was. Other than the fact that all the fluid in my body was shooting out of my face in a steady column, I was thinking normally. I was actually cognizant enough to realize that this was a really extreme session of barfing and that at a future date it might be valuable to know how long it lasted.

Another thought that occurred to me as I waited for the barfing to stop was that it might not stop. I honestly considered it a real possibility that I was fated to vomit continuously for the entire three days of the Drake crossing. I was sure I’d never last long enough to digest another pill, so I just hoped I’d pass out at some point to recuperate. When you’re actually rooting for your body to shut down in exhaustion, you know you’re in a bad situation. 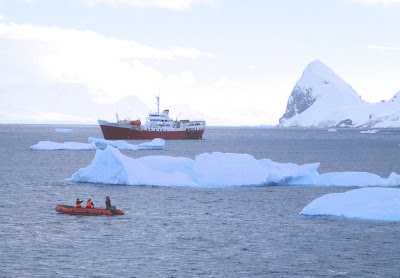 Eventually, although I still felt sick, I stopped physically shooting things out of my mouth. I was already reconciled to three days in my cabin, so I grabbed the trashcan from the bathroom and ventured out to the main room to try to stockpile as much bottled water as possible.

I was, of course, slightly ashamed to be so sick, especially as I’d been taking medication. And since I was recriminating myself for being a huge wuss, if the lovely and life saving woman at the front desk had asked how I was feeling, I probably would have lied and said, “fine.”

Luckily, when she saw me standing there drenched in sweat, holding a trashcan and trying to stuff two dozen bottles of water into the waistband of my pants, she deduced that I was not on top of my game.

“Did you take pills?” She asked in her blunt Chilean accent.

“Yes,” I said, abandoning my brave front, fishing out the pill bottle and handing it over. “But I still feel sick.”

The face she made when she read the label was one of utter disdain mingled with slight amusement.

“Four? Will that kill me?” I asked, still not wanting to cop to the lameness of my meds.

“Or you could take one of this,” she said, indicating the Take One jar. I took a handful.

I lurched back to my cabin with a pocketful of meds and a glimmer of hope that if I could just keep myself from spewing long enough to digest the pill I might be not be confined to quarters for the whole Drake Crossing. I used a towel to wedge my laptop into the space between the bed frame and the mattress and cued up a 45-minute episode of the Ricky Gervais podcast. I popped a pill, drank a slug of water, and lay there, breathing deeply and actively battling the urge to vomit. Eventually, blessedly, I feel asleep.

I don’t know exactly what those magic pills do—I think they balance your inner ear, not that I know what an inner ear is—but when I woke up from my nap, I was a different person. You know that scene in The Matrix where Neo finally realizes his potential and he’s simultaneously kicking everyone’s ass and actually seeing the computer code as it cascades around him? I felt a lot like that. 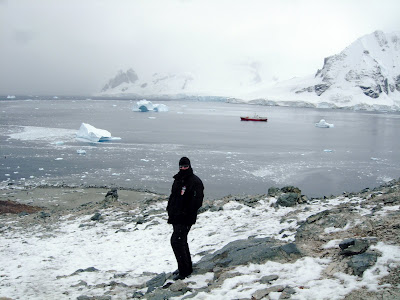 I was aware in my active mind that I should be sick, but for some reason, I wasn’t. Hypnotized, I walked over to the window to test myself. I drew the shade and gazed out on the pitching horizon. I didn’t know how long I’d slept, and when I initially pulled the curtain I thought it was nighttime. Then I realized I was gazing out onto the face of giant wave that was blocking out the sky. I watched the wave crest and break over the ship.

“Holy shit!” I thought. “I think we were just underwater! I should be so sick right now.”

But, no matter how ill my eyes and my mind told me I should be, my body wasn’t buying it. I stumbled out of my cabin and up to the dining room where I was greeted with a rousing round of applause from the folks who’d witnessed my earlier departure. I took a seat and joined them in looking out the window, pointing out which waves were really going to rock the boat.

“Whoa! Check that out! This is going to be a big one.”

After that it was pretty much smooth sailing. Well, figuratively anyway.

Nicely done!
However, I feel this post would have benefited from some charts, or maybe a bar graph indicating the ratios of breathing to barfing. But that's a very minor quibble.

bonjourno shipmate...how did you get the barf in the bowl? i tried to keep it contained to my cabin or at least off the ceiling.

u are such a one-ups-man!