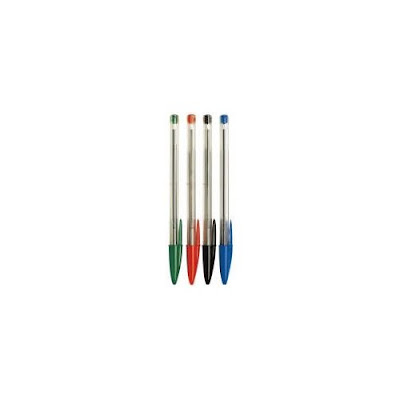 Hey! It's our 100th post! Actually, there are 159 posts on this site, but as we have quite a few recurring categories: Low Level Superpowers, Females Sighted Carrying Their Own Full-Size Pillows on Planes by Race, People Whose Asses Are Wider Than Their Shopping Carts, this is the first post to be numbered 100.

We're not going to go crazy in celebration of this milestone. In fact, I just want to talk briefly about one of my favorite new forms of humor: The Over the Top Customer Review. This hilarious and extremely narrowcast form of funny first came to my attention as it related to the Bic Crystal Ballpoint Pen. An ad for the pens was placed on Amazon.uk, and the first review, entitled "Very Good If You Need To Write On Paper" started a wildfire. Check it out:

This masterpiece of hilariously pedantic pen criticism led to other fantastic reviews.

Worked fine with my right hand, but when I came to use my left hand my writing came out looking like the work of a complete imbecile. I can only assume Bic have created a right-handed only pen, and would caution left-handers to "try before you buy".

By T. Dyton
I purchased this biro to test out the old adage that the pen is mightier than the sword. Having challenged a black belt Kendo champion to a fight I am now down to one arm and I think the bic got stepped on - so the old saying is a load of rubbish.

By Mr. D. Worthington
I wondered how long it would take for the rest of the world to discover this little beauty. My only concern is that now the secrets out of the bag, i might find it more difficult to find a replacement for the one i currently own. For this reason i will be ordering one or two as emergency back-up just in case.

Top tip: With one or two minor alterations, the bic also makes an excellent blow pipe or snorting tube.

Disclaimer: I have never used, nor do i ever intend to use Cocaine.

You can see the rest of the reviews here, but be warned, there are nearly 200 of them.

A more recent entry into this user-generated genre of satire came to the public's attention in late May when the "Three Wolf Moon 'Official' T Shirt" received the following review:

The author of this review, Brian Govern, a Rutgers U. student, said he was searching Amazon.com for a schoolbook when the online retailer's recommendation system coughed up the Three Wolf Shirt as something else he might find enticing. Brian said dashing off the review was a spur of the moment thing and that he had no idea his little gag would have any far-reaching effects.

So, what far-reaching effects has the review produced? Well, for one thing, as of June 20th, the Three Wolf shirt's sales ranking multiplied by 2,300 percent and it is now the single best selling item in Amazon's vast apparel catalog. Govern's review has also inspired more than 1,200 other wolf shirt enthusiasts to share their thoughts.

"Once ... while wearing the wolf shirt I was mistaken for Schneider, the building superintendent on 'One Day at a Time.' "

"If you are planning on spending exactly $9.14 on yourself this year, this better be the purchase."

"My friend and I are going to attempt to trasfer the design to the rear view mirror of my truck. Should increase the horsepower of the vehicle by about 50. Mostly because the horses under the hood will be running in fear of the wolves on my shirt and truck.- Tyler J. Winegarden"

But what I personally like best of all about the wolf shirt is that my son and I were walking the dog the other day when I found it being worn unironically by my neighbor Soriah. I took a picture of her which, I'm sorry to say, did not come out very clearly because my hands were shaking with excitement. 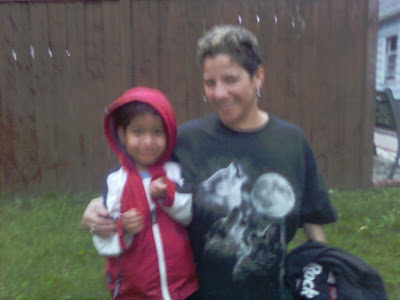 As an interesting, non-wolf shirt related aside, seconds after I took the picture of my neighbor, who should stalk by but Mittens McGillicutty, left-pawed cat arm wrestling champion of the world. He was in a rush, but he always has time to take a picture with his fans. Jeez! Just check out the python on that animal. 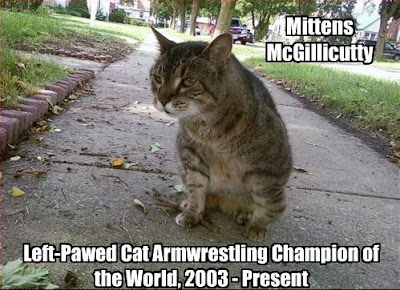 Anyway, to sum up, even though I'm sure the phenomenon of over-eager customer reviews will die out as quickly as everything else on the Intertubes, let's enjoy them while we can. I have written before about my inability to resist any food described as "Tuscan" (here, here, here) so you can see why the more than 700 reviews of this Tuscan Whole Milk would be close to my heart.

“One word of caution — milk, even when frozen into a baseball-bat shape, is nigh worthless as a baseball bat, merely shattering into cloudy fragments at the first strike of a baseball.”

“Tuscan Whole Milk ruined my life. I have no further details to add.”

"For those of us in the world who have had the pleasure of sipping 100 year old wines and 50 year old shots of single malt whiskey, I can only say that you might think you have had the best, but you would be incorrect. You have not lived until you have savored the full richness of Tuscan Whole Milk. Sitting on the beach in the south of France and watching the sun set with other beautiful people may be one thing, but sitting on your own front porch and sipping an ice cold glass of pure white Tuscan Whole Milk is another totally different experience."

"Every once and a while you come across a product that manages to redefine the genre. Tuscan Whole Milk is such a product. While other competitors tout add-ons such as 2%, skim, chocolate, or strawberry, Tuscon Whole Milk exposes these features for what they really are: gimmicks. To realize the genius of this milk, one needs only look at the effort that was put into this new product. The drawing board stage alone saw a complete rewrite of what it means to be milk and took over 50,000 cow hours."