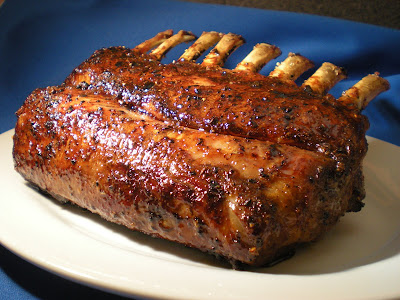 Man. I guess I knew this would happen, but I didn't know the Yanks winning their 27th World Series would be so sweet!

"But Chris," you say, "the season's young, how do you know the Yanks are going to win the World Series?" Well, I'll tell you.

Tonight I was peeling a cucumber and listening to the Yankee game on the radio when Alex Rodriguez came up for his first at bat of the season. For those of you who don't know, the Yanks have been floundering in the early goings, and A Rod's return from hip surgery has been much anticipated. There I was, innocently peeling, when Alex's much-ballyhooed debut at the plate came around. There were two on in the first, and I was just slicing off the last strip of rind when two things happened at the same time: First, A Rod hit an A Bomb for three runs; and second, as I raised my arms to cheer, the last piece of peel slipped off my knife, fell to the floor, and landed on its end like this! 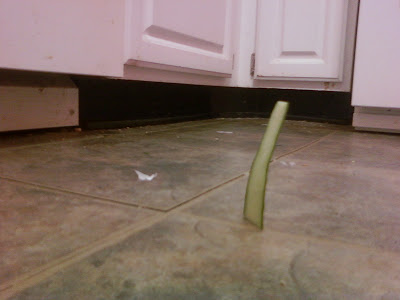 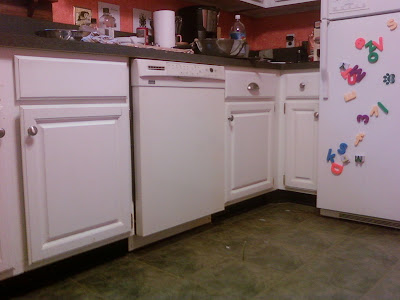 Hell yeah it landed like that! Forgive the quality of the pics, but I took them on my cell phone which was ringing off the hook. Anyway, I consider that pretty much incontrovertible evidence the Yanks will take it all this season. Congrats to all my fellow fans.

In this picture you can see my dog rushing in to consume the Miracle in Madison. It's gone now, and there's nothing we can do, but at least we'll always have that #27 banner to admire. And by the way, I realize the floor's kind of dirty, but hey, Max had just finished tossing a 1/4 pound of Cheerios all over the place, so I hope I get a pass.

Dinner was delicious. We were in a bit of a rush, so it was just simple, fresh Tuscan food tonight. 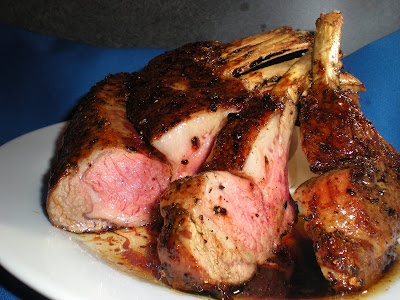 Heat oven to 350. Dry rack of baby lamb with paper towels and rub liberally with salt, pepper and, if you wish, fennel seeds. (I prefer New Zealand or Australian lamb to American. Here's why.) Put a skillet on the stovetop over low heat for 10 minutes or more. Slice off a few razor thin strips of the lamb's fat cap and render them in the pan, starting over low heat and gradually increasing the flame until the fat barely begins to smoke. (Or, even better, just before it begins to smoke.) Pour 1 tbsp grapeseed oil into the rendered fat to raise the smoke point and allow the pan to reachieve temperature. Put the lamb in the pan, fat side down, and sear the crap out of it, pressing down with tongs to ensure even browning. Flip the rack over, briefly sear the underside of the rack, 10-15 seconds should do it, and slide the pan in the oven to finish--7-10 minutes depending on how you like your lamb. Rest the rack for 5 minutes on a cutting board, slice into chops and serve. The people who like better done lamb get the ends, the people who like rare get the middle. If you have two people, like my wife and me, who like a combo of better done and rare chops, just cut the rack in two at the outset and follow these instructions with two mini-racks in the same pan. You can even sear the outside ends of each mini-rack if you want extra crutstiliciousness.

When you get the feel of how your oven works when applying this technique, try this: Take the lamb out after 4 minutes, instead of 7-10, then rest it in the hot cooking pan instead of on a cutting board. To keep things nice and hot, baste the meat with the rendered fat and juices every 45 seconds or so. This will maintain the carryover cooking you would have achieved in the oven and will also crisp up your crust the way a nice serving of steroids helps a good ballplayer.