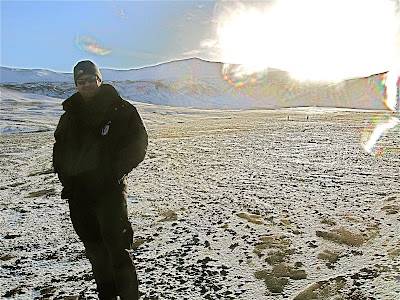 Here's a story I wrote for Desert Living about sailing to Antarctica. I hope you like it. If you'd like to see a PDF of the way it laid out in the mag, email [email protected]

Plenty of pictures at the end of the story.


Top of the World, Ma by Chris Connolly
It was amazing. If you sat still for a scant few minutes, the penguins would waddle right up and investigate your boots with their bright orange beaks.

Being careful not to frighten my plump new friends, I sank back slowly into the snow and closed my eyes. Sure enough, just as my guides had advised, within moments I felt a pair of scratchy, webbed feet alight on my right shin, tighten momentarily while the bird regained balance, then relax. It was official: there was a penguin sitting on my leg. I had secured my camera in a zippered inner pocket to protect it during the frigid and bumpy Zodiac trip from the ship to the mainland, and as I savored the feeling of the penguin perching on me I wondered if I should risk trying to retrieve it.

Some travel memories can be encapsulated in a photograph, while others are so ephemeral that any attempt to document them scatters them to the winds. If you travel a couple hours to see Buckingham Palace, definitely take a picture with one of the guards. If you’re in Pisa, don’t feel touristy if take one of those pictures where it looks like you’re holding up the leaning tower—it’s fun. However, if you’ve made it to the very top of the world, Antarctica, and there’s a penguin making its way up your leg, don’t roll the dice on the moment by reaching for your camera. Besides, if your shipmates have any sense at all, one of them will recognize the grandeur of the moment and snap a few frames on your behalf.

Antarctica for me, represented both a destination and a crossroads; or, perhaps I should say, a journey that culminated at a crossroads. Literally, I had come from the US, spent a few eye-openingly wonderful days in Argentina, boarded the sturdy ship Antarctic Dream, crossed the Drake Passage—the world’s roughest stretch of sea—and finally, on that steely gray morning, planted my boots on the Antarctic continent for inspection by penguins. And while that was certainly a long journey fraught with excitement and anticipation, in a figurative sense, I had come even further than that.

My love of travel was born of two-inch advertisement in the back of a New Yorker magazine when I about nine years old. I’d been thumbing idly through the pages when I came upon an ad offering travel to the South Pole. I brought the page to my mother and requested, with all the tragic earnestness of an infatuated nine-year-old, that we take our next family vacation there.

Dubious, but never one to discourage ambition, my mother told me to call the company and get some information. I did so and reported that trip cost $22,000 per person and took 3 months and shouldn’t we start packing?

Upon hearing this, my mother admitted that spending a hundred thousand dollars to lead me and my seven-year-old brother on a reenactment of the Shakleton expedition was less appealing to her than, for example, going to visit my grandparents in Florida. I was crestfallen. I don’t think I threw a tantrum, exactly—even at that tender age I could sense the trip was beyond our means—but there was a melancholy sense of reality and finality in realizing that I might never get to see Antarctica. I sulked for a few minutes, then I sprang into action: I rounded up all the fans in the house and established them around my bed. Then I turned them on full force, got my mother’s old fur coat and huddled under it while pretending to weather an Antarctic storm.

I slept in that situation, or in a modified, single-fan version of it, for about two years. To this day, in fact, I like to sleep with a fan on or a window open even in the winter, and I consciously trace the heritage of that preference back to the nights I spent huddled under mom’s fur coat.

When I sank back into the pristine snows of that glacier (well, pristine if you discount penguin poop,) and felt those webbed feet scratching around for purchase on the slippery surface of my advanced performance pants, the moment represented a great personal convergence for me. Antarctica was the seventh and final continent I’d visited and when I closed my eyes and reflected on all the miles I’d traveled—not merely on the Antarctic Dream, but from under my mother’s fur coat in my bedroom nearly 30 years ago—I could almost reach out across time and space and shake hands with my nine-year-old self.

“Congratulations, kid. We made it.”

How do you take a picture of that?

PICS OR IT DIDN'T HAPPEN 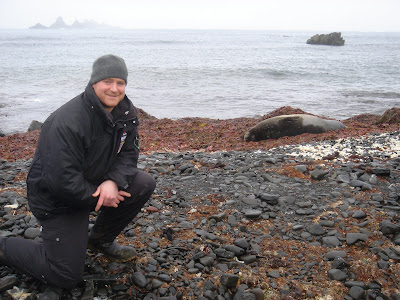 This was the first place we landed. Still pretty far south in the Shettland Islands. That's me and a fur seal, which, confusingly, is a sea lion, not a seal. 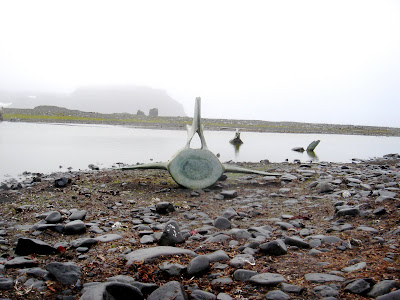 Here are some whale vertebrae. 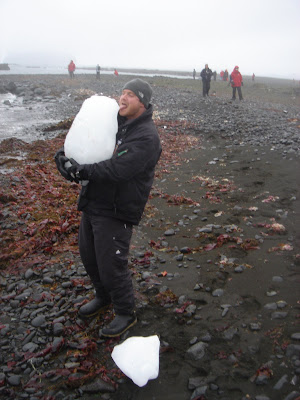 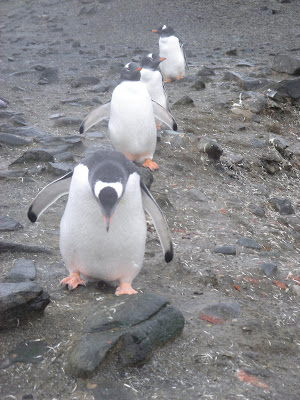 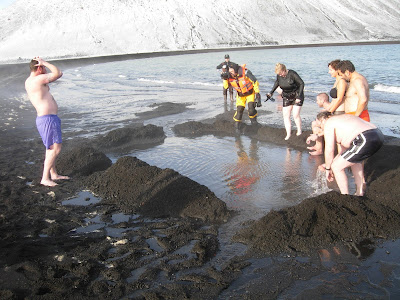 Swimming in the Southern Ocean. We're at the foot of a volcano here and the water in the square beach pool is really hot. You'd go in the hot water to raise your body temperature, then you could swim in the freezing ocean... 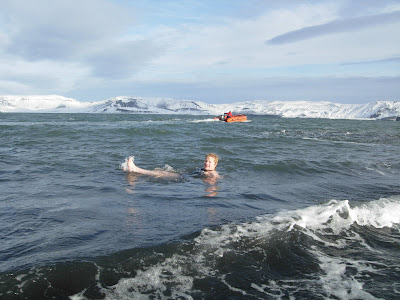 ...unless you were this lady from Minnesota. She just went in the ocean and stayed there. At one point during our journey I was looking over the rails of the ship and I asked the expedition leader, "If I fell off this boat, is there any way I'd live?" He said no. He said you'd freeze to death before they could even get the ship turned around. But this woman, I swear to you, swam in the Southern Ocean for at least 50 minutes. She didn't even mess with the hot water. She just dove into the ocean and kept shouting, "It's not that bad! Come on in!" 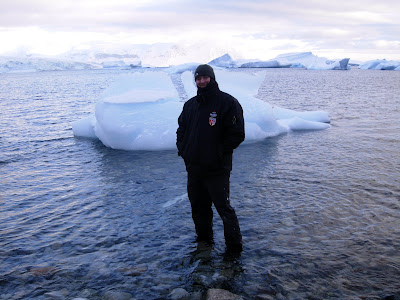 I could stare at icebergs for hours at a time. 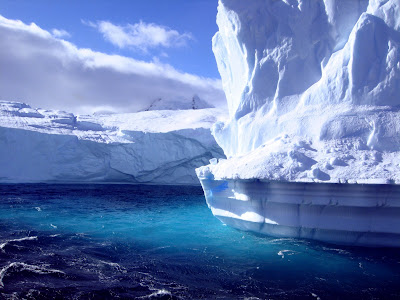 This iceberg was about the size of Yankee Stadium. 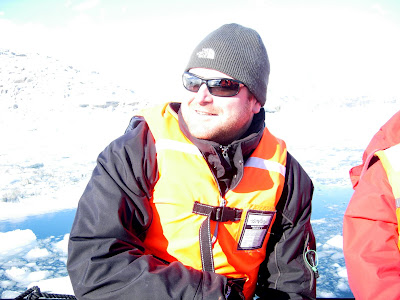 This was taken on a Zodiac going from the mainland back to the ship. Right after this was snapped I saw a 12-foot-long leopard seal pick a penguin off an ice floe and swallow it whole. 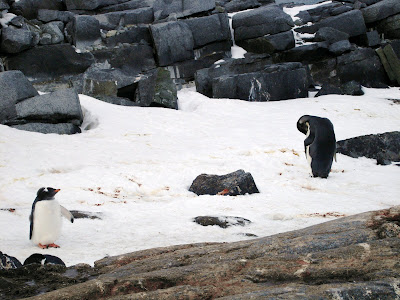 This is an emperor penguin, the largest type of penguin. Usually, if you want to see one of these guys you have to go way inland, but we spotted this massive fellow on an outlying island. He was probably heading back home and stopped to rest. 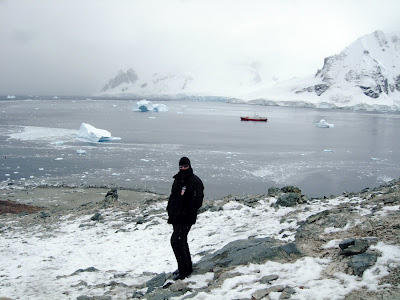 Because it was there. 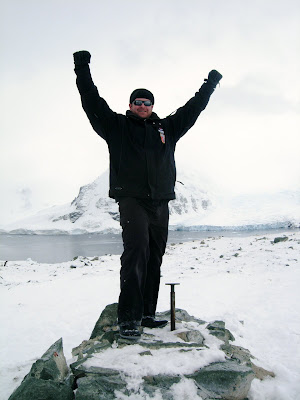 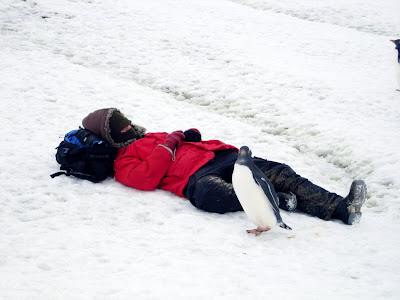 Waiting for penguins to perch.

Enjoyed this, but now I'm freezing thinking about the woman diving into that water!!