I guess I just wish they'd called yield signs something else. I don't mind taking orders from signs. I have no problem being told to stop, or go, or merge, or slow down, but whenever a sign tells me to "yield" my first reaction is to scream "I YIELD TO NO MAN!" and then charge through the intersection.

Probably the reason yield signs are such a problem for me is that I draw a lot of my inspiration in life from Conan the Barbarian. And he didn't do a lot of yielding. If I had to chart the things I’ve spent the most time thinking about in my life the list would go like this:

Now, The Ladies, obviously, are probably number one on any guy’s list, so there’s no need to look too deeply into that. But let’s take a closer look at ninjas vs. Conan. 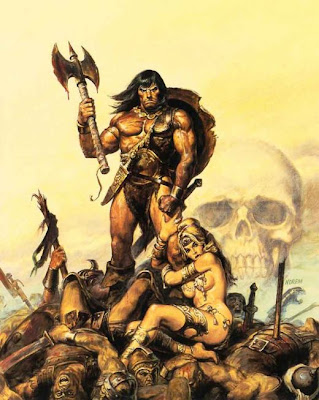 Ninjas vs. Conan
Listen, I love ninjas and I also love Conan. I'm not going to get into who would win in a fight between Conan and a ninja, because that's like deciding which of your kids you love more. Basically, I believe if Conan and a ninja got into a fight, it would never end. It would be a battle that raged on into all eternity.

What I do want to talk about is what Conan and ninjas have meant to me. I think the only reason ninjas top Conan in my thought pantheon is that I spent my ninth through twelfth years thinking exclusively and unceasingly about ninjas. This built up quite a lead in the ninjas’ favor and although I’ve been thinking about Conan a lot longer, the aggregate time advantage falls to the men in black. However, if I were to evaluate the impact Conan has had on my life in comparison to that of ninjas, I think the bronze-thewed Cimmerian wins out.

I recently sent an instant message to my buddy Josh that said simply, “What is best in life?”

Seconds later, without any prompting or advance notice, the reply came back, “To crush your enemies. To see them driven before you. And to hear the lamentations of their women.”

This, needless to say, is the first lesson Conan learned at the feet of his warrior masters, and it's a great way to tell if a guy's really and truly on my wavelength. I tried this test with a lot of other friends and almost all of them passed. In fact, even my WIFE got the answer, which means we're solemates. (For those of you who also read bushleague, my buddy John's answer was, “A handjob in a car flying off a cliff.” But then, he’s a weird dude.)
Conan’s impact on my life has not been merely philosophical either. For example, not long ago I was in the kitchen chopping up some leftovers for the dog when I hacked off a huge chunk of my finger. (Pictured.) (Yes. I stopped to photograph the chunk I'd just whacked off my finger.) 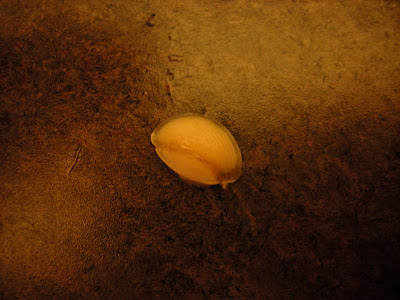 My wife and I piled the fam into the car and started driving to the emergency room to see if we could get the chunk sewn back on. Unfortunately, our route was bisected by a train track that runs all the way through Madison and as we drove we got stopped THREE SEPARATE TIMES by the same freight train!

Can you imagine the frustration? I’m sitting in the car, trying not to bleed to death and holding a tupperware container with half my goddamn finger in it, and I have to watch the same 400 railcars roll past me at three individual crossings!

So, what did I think about during this trying time? Did I call on JC? No. My mommy? No. My loving and supportive wife? No. I thought about Conan, by Crom!

I was sitting there, holding a quivering chunk of my own human body in my lap and I remember thinking “I bet Conan wouldn’t even go to the doctor for something like this.”

And that gave me strength.

So, yes, one day I will train my sons in the Way of the Ninja, but until they’re old enough to wield a pair of sais, the first thing they’re going to learn is this: