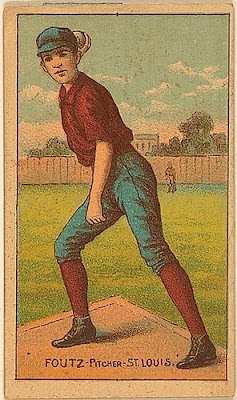 It is with mounting sadness that I report I will probably never be known as "The Kid." I feel like, as a guy who spent an inordinate amount of time on sports fields, courts and pitches, that, at some point, some group of people might have had the decency to start calling me "The Kid." But no one ever did. I think part of the reason for this is that I've always been a bulky dude. I was considering the nature of guys who do come to be known as "The Kid" and I've arrived at the conclusion that "kidness" can be determined via the following equation:

So, while I've been both promising and inexperienced, I've never satisfied the lankiness requirement for "Kids." And now that I've reached an age where the nickname is quite hard to earn, I'm filled me with a kind of melancholy and resentment--like a man on his deathbed who suddenly wishes he'd tasted an olive and spent less time at the office. (Although to a lesser degree.)

So, to assuage my feelings of regret, I am compiling a list of way I might still come to be known as "The Kid." If you can think of any additional ploys I might use to earn the moniker, please add them in the comments section below.

Top Three Ways I Might Still Come To Be Known As "The Kid"
3. Lose a lot of weight and start playing sports enjoyed by older people: shuffleboard, lawn bowling, square dancing
2. Become a rapper. Name myself MC Theki D
1. Always dress as a young goat
Posted by Chris Connolly

4. Move to New York and hang out with your mom. Then people will say "There's Hattie and the kid."

Get a paper route and carry a slingshot in your back pocket, and eat a lot of candy! That'll do it.

Or give it up on yourself, and just call both of your children The Kid, and confuse them both for years to come.

OR, just tell The Wiz, he can make any nickname stick, at least for a little while.

Go become the mascot for this radio station....
http://www.magic63.com/

How does your wife feel about a legal name change to Butch Cassidy Connolly??

When meeting new people introduce yourself as The Kid before anyone can say differently.

Get a personalized license plate that says: THEKID or CLMETKD.