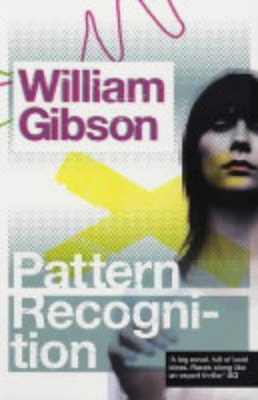 Even if you don't know William Gibson, he's all around you. Gibson is generally credited with intellectually shaping the Internet and coining the term "cyberspace" in his book Neuromancer--thereby spawning The Matrix and all that shiny black stuff. Then, in his spare time, he created Steampunk with his book The Difference Engine. In his latest (but not greatest) book, Pattern Recognition, he creates probably his best character: Cayce (pronounced Case) Pollard, a "coolhunter" who's employed by various companies to sit in a room and have them flash their new logos at her. Cayce's genetic sensitivity to brands, logos and fashion trends is so intense it's a type of borderline coolness autism. She's literally allergic to brands she finds inauthentic, like Tommy Hillfinger, and can be sent into a full-blown panic attack by the sight of the Michelin Man. Of Hillfinger, she says the following: "Simulcra of simulacra of simulacra. A dilute tincture of Ralph Lauren, who had himself diluted the glory days of Brooks Brothers, who themselves had stepped on the product of Jermyn Street and Savile Row ... There must be some Tommy Hilfiger event horizon, beyond which it is impossible to be more derivative, more removed from the source, more devoid of soul." Pollard is so allergic to Hilfinger, a chance encounter with a shop or advertising banner will send her flying into, oddly, a Starbucks, a corporation which somehow fails to trigger her adverse response.

The plot of the book, which is a little muddy and probably isn't as interesting a setting as the character it surrounds, involves Cayce jetsetting around the globe trying to track down the maker of a film--or at least a sequence of footage--which is slowly being leaked onto the Internet and which has inspired legions of cyber-speculators who call themselves "footageheads."

But Pattern Recognition, really, is about the hunt for the footage only to the extent that Animal Farm is about running a farm. Pattern Recognition’s true mission is to make us aware of the things we opt to include in our lives—to help us see the cogs and gears of commerce as they grind all around us.

Cayce Pollard’s sensitivity to branding and logos is so intense she razors off the labels from her clothes and sands off the imprints on the buttons of her jeans. She is, in a way, like a thing vegan, only able to wear things that could have been worn, "to a general lack of comment, during any year between 1945 and 2000." The only branded item she's able to tolerate is a fantastically expensive Buzz Rickson's flight jacket replica that gets a lot of play in the book. After the book published, Rickson's saw so much interest they reproduced the jacket. In the novel, Cayce tears her jacket and has to patch it with tape; awesomely, Rickson's seems to have included the patch in their reproduction.

Other reviewers have called Pollard "so awesome you can't even see her." I like to think of her as being so high fashion, so attuned to the world of product, that she's realized it’s all bullcrap and opted out. It's like, to use an 80s video game term, she's "flipped the game" of commerce. "Flipping" a game was a term that meant you'd amassed so many points, gotten so good, at a certain game that you exceeded the designer's plans for tracking player achievements. Eventually, the game would run our of points to allot you and new levels to challenge you with, so it would just "flip" and start you over from zero. In my view, Cayce is so attuned to the innate horribleness of commerce that she's flipped the system; to put it another way, she's like a puppet who's climbed out of the stage and started to inhabit the upper reaches where the strings are pulled.

Gibson's writing is sometimes a problem in this book. His use of commas, shocks me at certain, points. But he's so adept in other ways, I forgive him a great deal. Reading his books, and this one less than others, you don't so much follow them as appreciate them. You are aware you're in the presence of greatness even as some of the choices greatness makes puzzle you.

In the end, I don't know if this is a must read. It's definitely a should read. It's a big book, and one that will open your eyes to things you hadn't thought about before. Like Cayce Pollard, Gibson himself seems to live in a nirvana state above the dreary conventions of his medium of expression. Yes, he's churning out pages and chapters, story arcs and characters, but the whole cloth he's spinning from those various elements encompasses ideas so revolutionary the word "novel" doesn’t feel quite big enough.

I welcome anyone who has read or who reads this book to share his or her thoughts below in the comments space. While I wait for people to discuss it with, I think I’ll just sit here quietly sanding down the buttons on my jeans.

I like your review. Gibson's latest trilogy novels began with "Pattern Recognition" and over their courses his writing has changed. I also find his sentences hard to follow, with the commas, and all. I think I like this one, "Count Zero" and "Idoru" best of his novels. It's funny to read his latest three and see how the cutting edge concepts in them (cool-hunting, locative art & augmented reality, even collecting Curta calculators) are now becoming real and mundane. I think Cayce's allergy to branding functions as a alert to the rest of us that we should be more aware of its affect on us than we are.